Close encounters with a seal

It was obvious from the begging of the season – we had to take the SailBook Cup challenge.

The longest, sea racing, from Tri-City… – we’ll be there. Rabastan and Resumee combined their forces and we created double-handed crew. 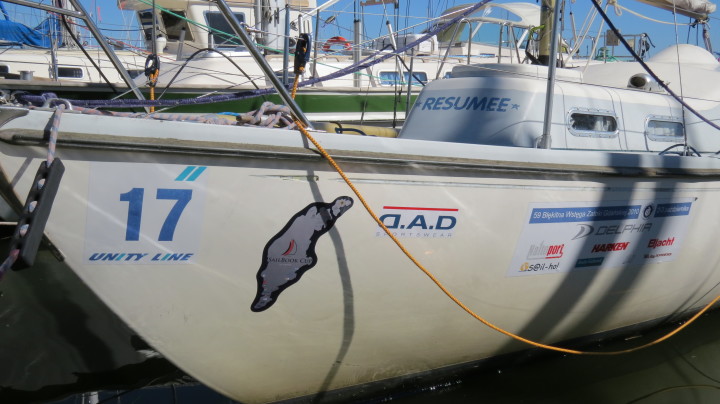 You know all about boar and QL from other articles, so I would like to mention about the start. Our boat is a little bit small, so we could not afford for even tiny loss. We were hoping that our chance is routing, technique and, of course, our spinnaker (called by Quick crew “Hello Kitty”, and by Endorphine “Beate Use” – you know: shocking pink), because in a close reach our chances were slight.

After successful start the close reach was equal. At last – Hel! Spinnaker goes up, and we stopped to drop back. We chose to go more west, we didn’t want to tack all the way to the Gotland.

We were fighting with Sea Bee at night – using our spinnakers. Spinnaker halyard is breaking and we tore it when we tried to pull the sail out. Fortunately, we can still use it, but we will have to repair it in Visby. We’re using staysail halyard, but just for 30 minutes. The side load is too high and roller at the mainsail is cutting halyard. Only mainsail topping had left.

We put spare spinnaker halyard thins time at forestay – ad it was good decision. The crew members are joking: so many halyards at the mast? What for?  One effective should be enough to pull the blocks.

It’s Sunday and we are on the west side of Gotland. First, we could hear our opponents on the radio, then we could even see them. It is a success – although the race is long, they could get rid of us anytime. But our hopes are to reach the target very fast, proved in vain. Here it comes: Monday and lack of wind – I guess that the winner of the stage would be rather glider pilot.

I woke up at the dawn, I’m looking around – a seal is near the side. Tomek says that  the seal plunders him for a long time by knocking on the side and sniffing autopilot. Fortunately, animal didn’t join us on-board. We are searching for some wind almost the whole day. Afternoon, we had an amazing view of the sun-soaked cliffs. We decided to go closer to the shore – maybe we will find some breeze out there. Wind has disappeared with the sunset, but we were in the fortunate position to catch some landward breeze.

In silence, we set the spinnaker and mainsail, to get ready for starboard tack. I hear mean question: “At what time Gotland evening breeze begins?” I answered: “At 8.00 p.m., of course”. We felt it at 7.59 p.m. We finished with full breeze, and Zbyszek from Słoni was watching us from from the rock in Visby bay. We entered the harbour just after Sea Bee.

We were very happy for the stage, Polish Day, Middle Ages Week in Visby.

Fresh steaks, olives and wine are perfect finish. We got full access to the Internet and forecasts in the library of the local university. It’s time to prepare for the return, our main opponent has already sailed away. We bonded our spinnaker, installed new halyards, now we are ready to go.

We wanted to start at 10.00 p.m., but we accepted equal start for other boats at midnight. We are in fighting mood, but we agree to let the ferry pass us by, and we started a few minutes later – we didn’t want to argue with the bigger one.

It was a great start at night, a great spinnakers fight between us and our opponents straight to Faro.

The next day we passed the east coast of Gotland and we tried to figure out further strategy.

Forecasts: wind blows from everywhere, silence, blows again, it’s stable and strong, from  the south to the west. Latest news from Robert from Endorphine: 25 knots. It’s too much for us to tack under the waves, so we decided to go west again.

And it was another good choice for Resumee. The boat was flying so fast with the full set of sails and autopilot – till 4.30 a.m. aprox. 20 knots – so whole crew decided to go to sleep, to gather some strength for later. After every 28 minutes we had to check the situation on board.

Before 5.00 a.m. the wind is getting stronger – 23-25 knots, more western (according to Endorphine even 32 knots). We achieved 8,5 knots in beam reach. We guessed that the waves were between 2-3 metres. Now this is sailing. Traverse near Władysławowo, spinnaker and straight to the finish line.

There’s only bay on the western left. Who’s been there, knows the issue. Boat comes straight from the sea in spinning and variable winds. Fortunately, we reached the Górki Zachodnie safe and sound, and we’re not arguing with anybody, which is not very common:)

We are fully satisfied with the race, that showed all aspects of sea sailing.

Huge thanks for the organisers, “gentelmen’s agreement” is a great idea, and huge thanks to all, who joined us in our journey.