I have to say it was a bit surprise when I received notification from Sunrise and Femtan from West Pomerania, and Facil of the Vistula Bay, which means that sailors eager for adrenaline are all over the place :). 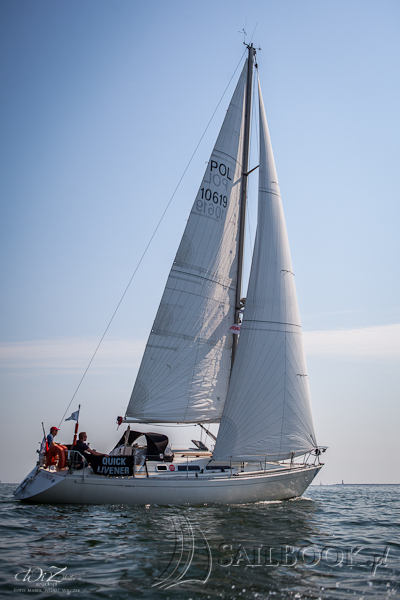 Mr Andrzej Szrubkowski of Gdansk Sailing Federation have told me, just before the first edition of SailBook Cup, that no more than 6-7 boats may appear on the route of the race (which will be a great success). Well, we had eight boats on Friday’s training before second regatta. I don’t know if it’s because of adventure, or because of our mate – boar. Sunrise’s crew claimed it’s because of the boar :)

An abatement of the fighting spirit among the crews started, when SailBook Cup and Corsaie Cup races began.

At 4.46 p.m. we headed to Hel as third, then went straight to the north, just after the beautiful Asterion and brave team on Słoni. We had to sail using our spinnaker, the worst option for us, so we had to try to save ourselves by using the 45m gennaker and 2 genoas. But Słoni was already getting out of our reach. 6-7 miles after we passed Hel, we’ve heard forecast from Witowo radio:  north wind 7-8 knots, and beautiful cumulonimbus growing on the larboard.

Unfortunately, Zbyszek from Słoni reported, that those conditions aren’t good for the Pegaz’s construction, so they made a turn and headed back to Hel – they will try again next year. I must admit that I envied them.

It was hard for me too, we had to prepare the boat and ourselves  for the bad weather – we were anxiously watching the horrifying spectacle of lightning over Wejherowo, and then around us. The situation does not inspire a great optimism, and the crew members started to ask, if the boat has a lightning protection… As if that wasn’t enough, Witowo started to broadcast PAN-PAN message: diver surfaced, look for the yellow bottle…

July 29th, Quick crew has no choice, we have to start an unequal fight with Neptune and, while tacking north, wade through the Baltic waves. At 4.00 a.m. autopilot fails, and the crew members have no idea about the steering wheel, what to do? We continue… 2 reefs with mainsail and 2 genoa (it’s too big, but you have to ramble into the wind), regular and weak 8°B gusting to strong 8°B. Because of the rocking of the boat, half of the crew had first signs of seasickness:)

At 1.30 a.m. on July 30, we saw the lights of a lighthouse flashing in the distance – which means we’re getting close to the Gotland. GSM coverage appeared, so one by one we received text messages from skippers who decided to stop the race: Lady Octet – headed to the Bornholm, Hayka and Asterion – ports on the east coast of Gotland, Anitra – Hel.

Facil, Femtan and Sunrise are missing…

Southwestern wind blows in the afternoon; boat under the Polish flag is catching us (it was Hobart from Gdansk Shipyard Yacht Club) crew’s asking if we’re taking part in SailBook Cup, and than they fly further, straight to the Visby:)

We entered Visby at 7.26 p.m. Femtan is already here (boat took part only in SailBook Cup) and we moor near Hobart (the race is the maiden voyage of a boat, just like Asterions), at longside to the quay.

Only two of eight yachts made it? We didn’t have information from Facil and Sunrise.

About 10.22 p.m. Sunrise finally crossed the heads! Krystian, my friend from KŻS, by taking part in the regatta prepared a boat, and himself, to the OSTAR 2013. Warm, joint supper on Quick, stories about our failures and we fell asleep.

Visby. Exploring the cliffs, city, meeting in the evening with Hobart’s crew, Sunrise’s skipper playing on his guitar, and pilot book from Jurek Kuliński (the author gave me one copy with a dedication – we will draw other items at the end of the race:))…What can I say, it’s just priceless…

We started the second stage at 6.45 a.m.! Southwestern wind, around 4B, beautiful weather. Femtan puts the spinnaker instantly, Sunrise is heading more west (according to “shaman” instruction). Quick is flying with its gennaker, Femtan with its spinnaker – straight to the Fårösund! Almost side by side! Speed 6-8 knots, high level of adrenaline!

We were only 20m away from each other, when we entered the channel (we agreed before the start, that ride on the engine through the channel is acceptable, for safety reasons, but under the condition of not exceeding VMG or average speed).

There was no such need! Wind from the port side and Quick still attacks Femtan! It wasn’t easy, but we finally made it and we left channel with 20m advantage! Sunrise is 2 miles behind, we’re on the right tack – still head to head until the morning. I woke up at 12.00 and I found out, that we’re in Liepaja:/ eh, autopilot…

24 hours pass as we cannot run the engine to charge the battery, so we have to still save energy. Forestay return, we put a tack on left and head to the Hel. Quite a nice wind 5-6B, it’s almost half way, perfect conditions for Quick! We’re heading to the Hel 6-8 miles per hour, we have a chance for some tour in Liepaja! We’re on the way, the GPS shows arrival around 7.29 a.m.!

At 2.37 a.m. on Friday, August 3, 2012: 6-7 miles  left to Hel, 19.7 miles to the finish line, and silence… it’s probably some tradition of the regatta;/ (we had a similar situation last year). The wind went down and we stuck! We saw white sails near to the cape in the morning, but it was too far to recognize its name. We’re guessing that the engine is dead and the poor guy is tired and just drifting ashore….

13 hours took us to reach the heads of the Port of Gdansk (from Hel) – in the heat!

That mysterious “white sail” came 1 hour and 46 minutes before us – it was Femtan! After 300 miles just get stuck in one place? It is unlikely!  It is a pleasure to fight with great opponent, even if you lose. Sunrise came after the old and brave Quick (a boat also stuck).

I would like to thank all skippers and their crews for taking part in this challenging event. I’m glad to have met you all,  that we could dine together, and feel that I’m not alone and there are other sailors, that want to do something more.