The closing ceremony of the longest and – some would even say – the toughest regatta in Poland, took place on August 11, Gdansk Shipyard Yacht Club during the first day of the Mayor of Gdansk Cup race. On this occasion we set up the Brotherhood of Gotland– for those, who completed the entire route of the race. The first members of the Brotherhood were honored with medals and assigned to the memorial book. 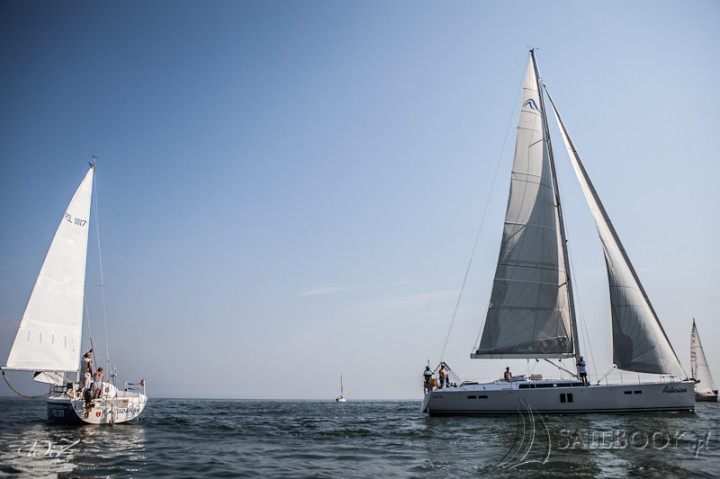 Because of other responsibilities, many contestants couldn’t stay at the closing ceremony (Facil was at the Lagoon, Sunrise and Femtan headed to the Unity Line), but every skipper had his own representative.

The winner of the first place – Ryszard Żełudziewicz at Femtan – took the trophy and brand new oilskin, prize funded by Henri Lloyd. It is an honor to fail a fight with such an opponent, but it doesn’t mean that I will let this happen next year!

Second place belongs to me and my Quick Livener – I won Raymarine radio, funded by Eljacht – yacht electronics leader in our market.

The winner of the third place is Krystian Szypka at Sunrise, and SailBook Cup race was his warm-up before OSTAR 2013. Krystian, who continued the fight despite loss of equipment, deserves special congratulation. Ocean Sails (Sailmakery) took care of the boat and thanks to that, Sunrise was able to check-in at the Unity Line start line.

Unfortunately, lots of the yachts couldn’t complete the race – cause of several conditions, beyond our reach, so I hope that the conditions will be much better in the next year. You can see those, who decided to take a challenge below:

Eljacht donated bags and Musto fleece for bootsman Kate from Marina Gdansk – thanks to her Marek Wilczek, photographer from Szczecin, had an opportunity to show his skills while sitting on a pontoon (borrowed from the MOSiR of Gdansk) and taking photos of the yachts.

Sailing schools – Junga and Morka – funded prizes and provide referees for the race.

Sailing Federation of Gdansk has provided free measurements to obtain KWR rating, and gave our contestants full support (I hope that Sailbook Cup deserves to put it permanently in the Bay of Gdank Cup calendar). The Pomerianian District Sailing Association, in accordance with its mission, gave us organisational and financial support.

I would like to thank everyone for the support.

Eight boats, eight skippers and eight crew took part in this edition of the race. There were no incidents (despite of adverse conditions). What is worth to say, is that all of the boats are private yachts, and participants are amateurs – as you can see, there are real sailors between amateurs too. The good sign for the next edition of Sailbook Cup is the fact, that we had really a high turnout this year (other events in the Bay were not so popular).

According to the clock only 346 days left to the next edition of the race, that’s why we already started prepares and we are looking for sponsors: thanks to the funding we will be able to initiate tracking – which will increase the value of the event in the media and, undoubtedly, add some special emotions – it’s a different thing to take part in the race, when you know that everyone can see where you are, how fast you go, and they keep their fingers crossed for you.

Our participants came from all over the coast, so maybe it’s time to invite our neighbours form east and north too? Maybe there are some fans of the long-distance adventures?

What I have in my mind, thanks to Krystian Szypka by oceanTEAM advice, is to join a group of solo sailors, or add some time bonus for individual contestants.