The race is still on!

Thanks to their advantage and by using the strong gusts of wind, Polled 2 and GoodSpeed were first to reach the finish line in Sopot.

Other boats  get stuck in calm, flat waves and have had to struggle with lack of wind from Gotska Sandön up to the headland Hel Peninsula.

The change of the wind gave a chance to the Endorphine, Quick Livener and Atlantic Puffin to reach the finish line today.

We have to give our appreciation for the skipper of Four Winds, who decided to stay in the game despite losing the mainsail and now he’s sailing by using third reef.

The real dark horse of the Open class is our single sailor, Michał Weselak (it’s because only he had left) and SailBook Cup is his test before the Battle of Gothland.

Konsal, Resumee, Facil, Four Winds, Kristi and Wanda – each skipper began to fulfil his strategy to search some more favorable wind conditions. The weather forecasts are missed, so the participants have to change their sails on and on, trying to aim straight to the Sopot.

Perhaps, the final fight will be in the Gulf of Gdańsk.

The boats, which were forced to retire from the second leg, are slowly coming back. Piorun 4 is resting in Jastarnia for almost a day, Generał Zaruski recently sailed into the port of Gdańsk, since the morning Bystrze is waiting for the crew exchange, while Bliski is located near a peninsula next to the Quick Livener.

All participants have a constant radio contact during the race, but not always with everyone, so they have to repeat the messages to the other yachts. The last boat, Kristi, is the absolute leader of the radio comunication. Thanks to the incredibly efficient antenna crew have contact with everyone through the entire route. 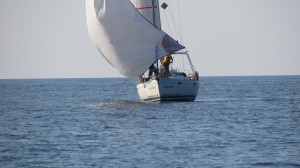 Left to the finish: